An Epistolary Story is one told through letters.

What is an epistolary novel? Simply put, it is a story told through letters. The most well-known (to me) is The Screwtape Letters, written by C.S. Lewis.

The Glinda Letters creates a bridge of history between The Hidden History of Oz stories (specifically The Witch Queens trilogy) and The Wonderful Wizard of Oz, written by L. Frank Baum.

Glinda writes to Oscar Diggs while he is in his self-imposed exile in Emerald City. She gives her deepest thoughts to her dear friend in messages that only they will see. There is an honesty conveyed in these letters that does not appear whens he is with other people. She conveys a sense of her own worldview that she simply cannot share with other people, due to her position as the Sorceress Queen of the South. She is responsible for protecting Oz, and that means duty comes first. There is no question that Glinda was fulfill her duty. The questions in her letters reveal a vulnerability that she cannot show to others.

See how they see themselves

The amazing thing about these letters is that Glinda sees the world in a very specific way. She believes in liberty and freedom, just like Oscar, but she does not believe that he can do it simply by being good. She has to gain power and protect him so that he can do what he believes in. Everything depends on her.

Glinda has a stilted view of the world that becomes apparent as you compare her words in private letters to her actions and words to others.

The Glinda Letters fills in the gaps between several stories in The Hidden History of Oz series. It is the backbone of history upon which to hang the sinews of story. It is one perspective drawn over a lifetime of experience waiting for love to open the door and step again into the light.

The Glinda Letters is available now on Amazon, or wherever ebooks are sold. Order your copy today and discover the Hidden History that sets the stage for Baum’s classic stories.

The Glinda Letters is published and available for purchase on Amazon, Smashwords, or wherever you purchase ebooks. If you are more of a traditionalist, and prefer hard copies, you can buy a paperback copy from Amazon.

Why are The Glinda Letters important to Oz? They span the time between The Witch Queens trilogy and L. Frank Baum’s original classic, The Wonderful Wizard of Oz. I believe Glinda to be the most important character in modern Oz END_OF_DOCUMENT_TOKEN_TO_BE_REPLACED

I have been brainstorming Oz stories for about five years now. This includes visual brainstorms and concept art for the eventual graphic novels of some Hidden History of Oz stories. To give an idea of some of the character development over the last two years, I thought I would start with the hero – Glinda.

Glinda is the teenage daughter of the most powerful sorceress in Oz. Through a series of tantrum-inspired events, Glinda becomes an orphan on the run from the Wicked Witches. (See The Witch Queens novel for full details.)

These are the first sketches in the concept art category. There will doubtless be many more. For more of my artwork, you can visit my deviantart gallery. I am beginning to share some of my artwork again.

For reference purposes, here is a public domain illustration of Glinda from one of Baum’s books, Glinda of Oz. This is Glinda approximately 60 years after HH1: The Witch Queens. She learned the secret to aging well. You’ll just have to read the book and find out what it is. The portrait of Glinda the Good appearing in Glinda of Oz, by L. Frank Baum. (Photo credit: Wikipedia)

Do you want to see more concept art for The Hidden History of Oz characters and places? Let me know in the comments below.

I assure you, dear reader, that such a thing can be, but not in the way that you might expect. It requires dark magic, a witch’s blood, and a mechanical construct powered by the magic of the brick roads. Intrigued? END_OF_DOCUMENT_TOKEN_TO_BE_REPLACED

Teaser: Crown of the Dreamer

The Hidden History of Oz, Book Two: Crown of the Dreamer is nearing completion. It is in the proofreading phase right now. I am very excited to share it with you. Every day brings the manuscript closer and closer to your hands. The story is just about ready to take off and make some magic.

Here is a teaser for the cover in-progress:

I anticipate that it will be available for purchase in September on Amazon, in both paperback and Kindle versions. Other digital formats will soon follow. In the meantime, if you haven’t picked up a copy of The Hidden History of Oz, Book One: The Witch Queens, now would be a great time to dive into the mysterious history of Glinda and Oscar Diggs. You can find the book on both Amazon, and Smashwords.

END_OF_DOCUMENT_TOKEN_TO_BE_REPLACED 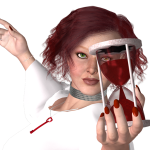 The Hidden History of Oz came to life over several years. It didn’t spring fully-formed from my forehead. The concept began when I discovered clues cleverly dropped by L. Frank Baum that told the story of Oz before the Wizard came …

But I’m getting ahead of myself. Let’s take this one step at a time.