A Noctuary for Your Thoughts

The Gates of Dream, by Xeeming on deviantart.com

Noc´tu`a`ry
n.1. A record of what passes in the night; a nightly journal; – distinguished from diary.

The answer, for me, is a resounding yes to all of these questions. But then comes the next question,  why? Why would you want to record your dreams? END_OF_DOCUMENT_TOKEN_TO_BE_REPLACED

Cabbages and Cyclones: The untold story behind Dorothy’s story 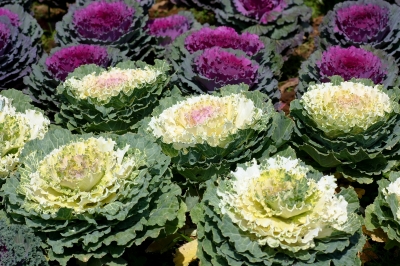 How do cabbages verify the hidden history behind Dorothy’s trip to Oz? If the author thinks it is important enough to put into the novel, it must be significant, right? Of course. As I did some research, I discovered some very interesting historical facts that bear out L. Frank Baum’s classic story, The Wonderful Wizard of Oz.

Dorothy’s journey perfectly matches with the mentions of cabbages in the original text. Follow along, and we’ll explore the facts together after the jump.

END_OF_DOCUMENT_TOKEN_TO_BE_REPLACED 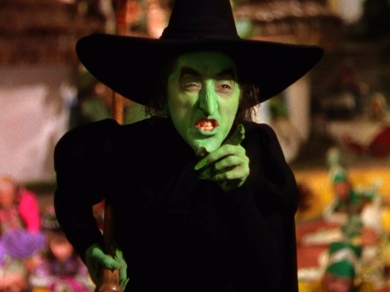 What makes each of these versions different? Who is the Wicked Witch of the West, anyway? END_OF_DOCUMENT_TOKEN_TO_BE_REPLACED

An Oz where dreams change the world

With the announcement of a fourth Oz-inspired TV series, there are a lot of people on the interwebs that are justifiably annoyed. Why take a classic tale and re-spin it again and again? Simple answer – it’s the 75th Anniversary of the MGM Wizard of Oz movie (1939) and Warner Bros. owns the rights.

I assure you, dear reader, that such a thing can be, but not in the way that you might expect. It requires dark magic, a witch’s blood, and a mechanical construct powered by the magic of the brick roads. Intrigued? END_OF_DOCUMENT_TOKEN_TO_BE_REPLACED

The Lollipop Guild, from the 1939 movie

Munchkins, you know, the short people in the Wizard of Oz movie. Why are they so short? Why do they like blue?

L. Frank Baum wrote four races into The Wonderful Wizard of Oz – Munchkin, Winkie, Quadling, and Gillikin. Then there were the folks in the Emerald Lands – the accepted term is Ozian, which Baum used himself in three of his books.

As I was working on Hidden History of Oz, Book 2, I noticed something peculiar. Munchkins and Gillikins have the same suffix – kin. Could they be related? I believe so.  Walk with me a while and I’ll tell you.

END_OF_DOCUMENT_TOKEN_TO_BE_REPLACED 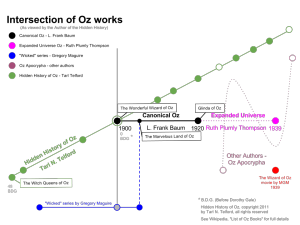 This handy infographic displays the interrelationship of Oz stories.
There are a lot of Oz stories out there, and we’re about to discover even more. Find out where The Hidden History of Oz series, written by Tarl Telford, fits into everything.

How did Dorothy get to Oz? How did Oscar Diggs (aka The Wizard) get to Oz?

The simple answer is that they flew. With all of the satellite technology that we have available to us now, you would think that Oz would show up on Google Maps, but it doesn’t. The reason is simple – there is only one way to get to Oz.

Or, put another way, only dreamers enter Oz. Proof after the break. END_OF_DOCUMENT_TOKEN_TO_BE_REPLACED

The basic premise of the Hidden History of Oz is “dreams determine reality.” Compare this with the basic premise set forth by L. Frank Baum in his written introduction to The Wonderful Wizard of Oz:

“… a modernized fairy tale, in which the wonderment and joy are retained and the heartaches and nightmares are left out.” (emphasis added)

As stated on this site, “There is that history which is celebrated … and that which is hidden.” Baum told simple stories with no explanation. They have enchanted generations. The fairy tales of the past have been lost in the shadows as today’s knowledge has expanded. It is time to revisit the fairy tales and discover their meaning for our generation. END_OF_DOCUMENT_TOKEN_TO_BE_REPLACED 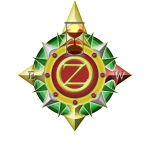 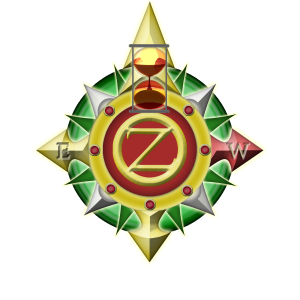 Compass Rose for the Hidden History of Oz. Note that the directions East and West are reversed from the "civilized world"

The compass rose in Oz has been a controversy for more than a century. The directions East and West are reversed on the first “official” map of Oz.

Was this a mistake? Or are directions truly different in Oz?  END_OF_DOCUMENT_TOKEN_TO_BE_REPLACED

Science enriches our lives, broadens our understanding, and encourages us to explore the world we live in. Science can also be a big downer when it comes to magic and myth. Sometimes knowing the science of stories makes them less … well, magical. That is the risk we take in this post.  END_OF_DOCUMENT_TOKEN_TO_BE_REPLACED

The Hidden History of Oz came to life over several years. It didn’t spring fully-formed from my forehead. The concept began when I discovered clues cleverly dropped by L. Frank Baum that told the story of Oz before the Wizard came …

But I’m getting ahead of myself. Let’s take this one step at a time.