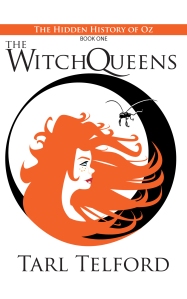 A book cover is more than a pretty picture

I did a lot of research on book covers. Pick up whatever book you have sitting next to you right now and take a look at how many different little pieces are on there – it’s pretty amazing. Everything from the cover illustration to the title logo, to the imprint symbol on the spine. Since I was designing this myself, I wanted it to be something that I could be proud of for the rest of my life. I wanted to do it right.

So I looked at different books on my shelves. I wanted to see how book series maintained continuity in their design, so I looked at books from CS Lewis (Narnia series, Space trilogy). Madeleine L’Engle (Time series), “The Complete Idiot’s Guide to…” books, and even some Penguin books. Penguin is a very powerful imprint; they are doing something right; so I looked at all of the details they had, including the imprint logo.

Here’s my logo for Emerald Engine Studios – powered by dreams.

A different way of looking at the cover

I watched TED Talk from cover designer, Chip Kidd (“Designing Books is No Laughing Matter. OK it is.”). It really opened up my mind to what a book cover can do.

Then I read this article: Hack the Cover, by Craig Mod. Long article, but it has a lot of good information if you are working out a cover design for your book. A lot of different aesthetics to consider.

Have you ever heard of Saul Bass? He’s a legendary designer. Even if you haven’t heard his name, you might recognize his work. (cool site here). I learned how difficult it is to make something look simple. Even the late Steve Jobs said:

“Simple can be harder than complex: You have to work hard to get your thinking clean to make it simple. But it’s worth it in the end because once you get there, you can move mountains.”

Here’s the top of my cover. extending a little bit past the spine and onto the back. I wanted three simple colors – red-orange, white, and black. These three each played their part to balance out the cover image and titles.

My goal was to achieve lots of white space, a profile of the main character with the hair-color as the dominant color, a limited color palette, simple shape behind character with symbolic meaning.

I picked two easily readable styles for the cover text. I picked carefully. It was my book, and I wanted something timeless and recognizable. The title is from the font Trajan Pro. It is the most-used font on movie posters. The other font is Myriad Pro – it is one of the fonts included with Adobe Illustrator.

When you look at the two styles in the image above, notice that one is serif (the letters have feet sticking out) and the other is san-serif (the letters are straight). Using these contrasting font styles allows for for easy readability. They complement each other on the page.

On a quick side note, I really like the Q in Trajan Pro – how it dips under the other letters. I enlarged the first letters of the words for dramatic effect. If you look at the full image at the top of the page, the flying monkey’s wing makes a nice complement to the Q as it breaks the edges of the circles.

The simplest designs function as icons. They can be seen and recognizes immediately. I wanted something that would be easy to read, but it would also stand up to close scrutiny. There are a lot of books that have published (or re-published) recently for the teen set that give a bold title, witht he authors name, and then a photo of a flower or a face. I wanted an illustration that would stand the test of time.

Here are some thumbnail sketches of Glinda’s profile. You can see I wanted to incorporate other elements, such as the Ruby Palace, the moon, maybe a gate of some kind. Then I realized that it was getting too complicated. I read through some illustration blogs that critiqued book covers and comic covers. I learned that the best covers don’t try to incorporate more than two elements (but even then, one element has to be dominant). These are story elements. Basically, don’t try to say too much with the cover, otherwise readers will get visually confused and walk right by. 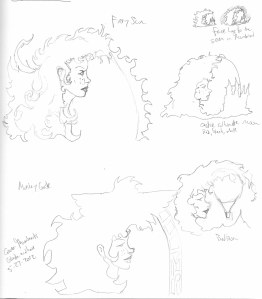 Have you looked at titles on Amazon.com recently? How large is the cover image? How clear is that thumbnail? Generally, there are a lot of elements on the cover competing for viewer attention. The simpler the cover, the easier it is to read. The covers that are too simple end up being boring. So where is the line? You can see what I decided.

Here is the final sketch of the idea before I took it into Illustrator. On Memorial Day 2012, I laid down to take a nice afternoon nap. As it is wont to do, my brain was busy sorting through ideas. This image came to mind. My eyes flashed open and I grabbed my sketchbook and sketched it out. 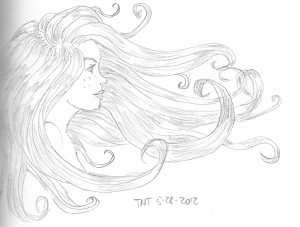 The drawing came easily to me – that is when I know that I have it clearly thought through. My brain did the hard work, and my fingers get the credit. There are differences between the sketch and the cover image, of course, but the concept is clear – the sketch inspired the cover.

What do you think?

Do you like the behind-the-scenes view of my creative process?

Let me know in the comments below. I love to share my work – not just the final version, but the steps, successes, and failures along the way. All of it helps. These finished creative works don’t just spring – fully-formed like Athena – from my forehead. It takes a lot of work and effort and attempts to get it right.

On Amazon in paperback, or discounted for a limited time ($0.99) on Smashwords (ONLY through March 27, 2013) with this discount coupon – RM22K (not case sensitive).

This entry was posted on March 15, 2013 by Tarl. It was filed under Books, The Man Behind the Curtain and was tagged with book cover, Chip Kidd, cover design, Craig Mod, Design, Glinda, Hidden History of Oz, Saul Bass, thumbnail sketches, Witch Queens.